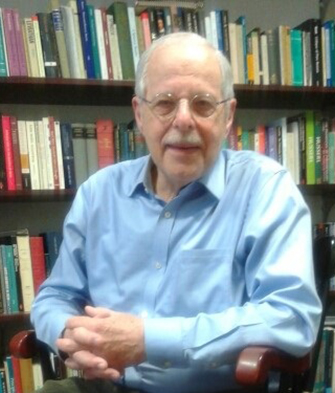 David Novak was born in Chicago, Illinois on 19 August 1941. He received his AB from the University of Chicago on 10 June 1961, and from the Jewish Theological Seminary of America he received his MHL (Master of Hebrew Literature) on 7 June 1964 and his rabbinical diploma on 5 June 1966. He received his PhD in philosophy from Georgetown University on 23 May 1971.

Since 1997 Dr. Novak holds the J. Richard and Dorothy Shiff Chair of Jewish Studies as Professor of Religion and Philosophy in the University of Toronto, where he is a member of University College and the Joint Centre for Bioethics. During 1989-96 he was the Edgar M. Bronfman Professor of Modern Judaic Studies at the University of Virginia. He has also been on the faculties of Oklahoma City University, Old Dominion University, the Jewish Theological Seminary of America, and Baruch College of the City University of New York. During 1966-69 he was the Jewish Chaplain to St. Elizabeth’s Hospital in Washington, D.C., and during 1966-89 he served as the rabbi of several U.S. congregations. He has been a consultant to the governments of the United States, Israel, and Poland, and to the Australian Broadcasting Corporation.

David Novak is a Fellow of the Royal Society of Canada (FRSC), and a Fellow of the American Academy for Jewish Research. He is a founder, Vice President, and Coordinator of the Panel of Inquiry on Jewish Law of the Union for Traditional Judaism. He is a founder and member of the Board of Directors of the Institute on Religion and Public Life, and a member of the Advisory Board of its monthly journal First Things. He is a Consulting Scholar and a member of the Board of Advisors of the James Madison Program in American Ideals and Institutions of Princeton University. In 1992-93 he was a Fellow of the Woodrow Wilson International Center for Scholars in Washington, DC. In fall 1995 he was Distinguished Visiting Professor of Religion and Business Ethics at Drew University. In February 1996 he delivered the Lancaster/Yarnton Lectures in Judaism and Other Religions in Oxford University and then in Lancaster University. In fall 2004 he was the Charles E. Test, M.D. Distinguished Visiting Scholar at Princeton University, and in spring 2006 he was Visiting Professor of Religion at Princeton. In 2006 he was appointed to the Board of Directors of Assisted Human Reproduction Canada (AHRC), a federal agency, by the Governor-General of Canada. In 2008 he founded the Tikvah Fund Summer Seminar of Princeton University. In 2011 he was appointed a Project Scholar in the Religious Freedom Project of the Berkley Center of Georgetown University.

David Novak is the author of sixteen books, the last two being Tradition in the Public Square: A David Novak Reader, ed. Randi Rashkover and Martin Kavka (Eerdmans 2008), and In Defense of Religious Liberty (ISI Books 2009). His book Covenantal Rights (Princeton University Press) won the American Academy of Religion Award for “best book in constructive religious thought in 2000.” He has edited four books and authored over three hundred articles and reviews in numerous scholarly and intellectual journals. He is one of the four co-authors of Dabru Emet: A Jewish Statement on Christians and Christianity, first published in The New York Times in September 2000, and now translated into over eight languages. He is the subject of Matthew Levering’s 2010 book, Jewish-Christian Dialogue and the Life of Wisdom: Engagements with the Theology of David Novak (Continuum).