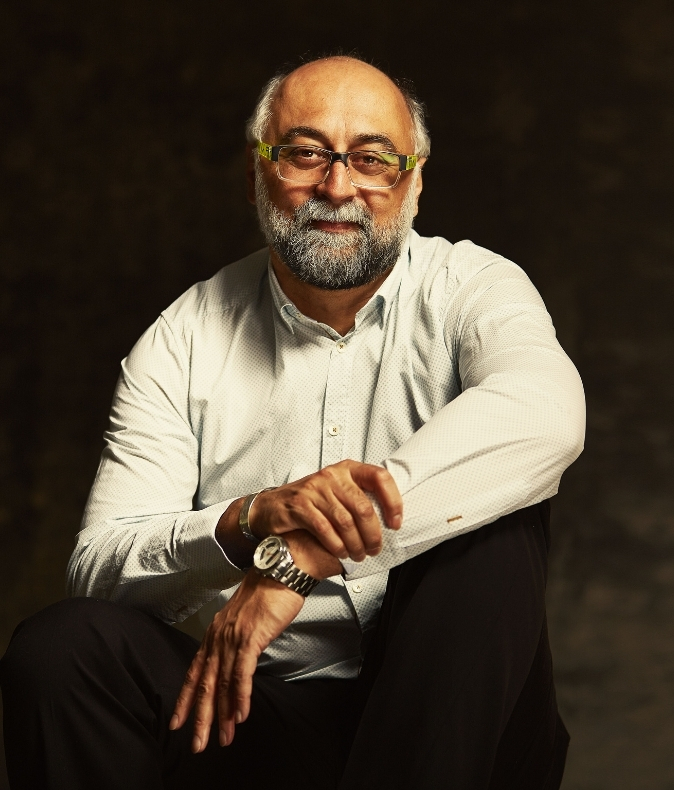 Dr. Amir Hussain is Chair and Professor of Theological Studies at Loyola Marymount University, the Jesuit university in Los Angles, where he teaches courses on world religions. His academic specialty is the study of Islam, focusing on contemporary Muslim societies in North America.  He currently serves on the Board of Directors of the American Academy of Religion and was recently elected as Vice President.

DSR: You earned your academic degrees (BSc, MA, PhD) from the University of Toronto. How did you end up in the DSR?

AH: I was born in Pakistan and my family moved to Toronto in 1970 when I was four. Back then, Toronto was a small provincial city, Montreal was the big city. Toronto was 80 percent British. The Italian immigrants were the exotic other, forget about the Pakistani or Sikhs.  Now it’s different; you have a huge Muslim population, you have mosques all over, it is common to see women in hijab and hear Punjabi language commentators on TV. Back then you didn't have that.
If you had asked me in high school if I wanted to be a professor, I would’ve said I don’t know what that is. Both of my parents worked in factories, and I thought the smartest thing you could be was a doctor. But then at university I discovered there's a thing called an intellectual, that you can be smart and get paid for reading and writing.
I started at the University of Toronto as a psychology major, minoring in English. Northrop Frye was in the department and I took his courses on the bible and Shakespeare and I thought, well I'm a Muslim and maybe I should learn about my own religion. Growing up we couldn’t practise because the one mosque was in High Park, and we lived in Parkdale, and who got time off to go to Friday prayers? You grow up in the religion, but you don’t have the ability to investigate it until, in my case, university, and then you start to learn the history and the background. And that’s when I was like, this is what I’m interested in, I want to be an academic. I landed in the DSR, and there was no looking back.

I was fortunate to be at U of T at that time. Jane McAuliffe was the leading scholar of the Qur′an and of Muslim-Christian relations. And Wilfred Cantwell Smith, the Islamicist and comparative religion scholar who was affiliated with Trinity College. To be able to have conversations with Wilfred Cantwell Smith, it was extraordinary.

DSR: Did you always know your academic focus would be on the study of Islam?

AH: In 1992 there was very little writing on contemporary Islam, or Islam in Canada. So focussing on how Muslims came to Toronto was a chance to pull together historical research and look at what were people doing here? My research focussed on Salman Rushdie's novel, The Satanic Verses, and how Muslims in Toronto were responding to it.  Whereas America defines itself largely through the lens of 9/11, 30 years ago we had intense reactions in Canada with the publication of The Satanic Verses. Canadians are nice, that’s part of our trope.  The white suburban reactions we have in America, we also have those in Canada. And we do we read urban as brown. Take Toronto, a city that was 85 per cent British, to currently where it is majority non-white. For some this is great, and for others this means it’s time we move out to the suburbs.

DSR: Do you feel driven to dispel your student’s assumptions about Islam? Is it ever necessary that you have to roll back some misconceptions your students have about Islam?

AH: I came to the US in 1997, pre 9/11.  Back then my students didn’t know about their own religions, and they didn’t know much about Islam, whether they were Muslim or not. Post 9/11 that changed. They came in knowing about Islam, but everything they knew was wrong. I’d say to them, you didn't get this from a book, you got this from the media, Fox News, MSNBC. And so all of a sudden I’m teaching media literacy, and the book I start with is Neil Postman’s Amusing Ourselves to Death: Public Discourse in the Age of Show Business. You have got to pay attention to what is out there and who is framing it. My students come in thinking that Buddhists are cool and zen, and they maybe have a Buddhist tattoo. And then I show them what’s happening in Myanmar; guess what? Buddhists do some awful things because they're humans.  Muslims are human. We have to start with what you come into the class with, the image you have of Islam. In my Islam in America class I put up a picture of Osama Bin Laden, and everyone knows who it is. But then I show a picture of Iranian American artist, Shirin Neshat, and Ahmed Zewail, the Nobel laureate in Chemistry at Caltech and no one knows them. You all recognise Bin Laden, but you don’t recognise one of the greatest artists in the world. The only Muslim you can pick out is the terrorist, as if only Muslims commit violence. Take the beheading of the teacher in France, the way the French government frames it is this is a fight against civilization. If you juxtaposition that with what happened in America, the guy who ran over the woman in Charlottesville, it’s not just white nationalism: it’s white nationalism and Christianity. All that to say without being an apologist, [Muslims] are human beings and sometimes they do the most horrific things, and sometimes the most beautiful things.
We are starting to see Muslims tell stories in the media, we’ve got the show, Patriot Act with Hasan Minhaj, actor Mahershala Ali has won two Academy Awards. We need more representation, Hollywood needs to cast Muslims for who they are, cast a Muslim doctor, have the woman at the Starbucks in a hijab, put Muslims in ordinary situations.

DSR: You have been voted Professor of the Year twice. Your style obviously resonates with your students. Can you explain why they love your classes?

AH: I’m genuinely curious about engaging with students, and they see that.  Most adults talk at them, they don’t talk with them. Are you interested in who they are and what they bring?  You try to be relevant and understand what they’re into. I ask them what are you listening to, and they tell me ‘I like old school rock and roll, like Nirvana and Pearl Jam’, and I’m like, that’s old school to you?  They are interested in sharing that, the connection to pop culture. In my, Comparative Theology course we start with the Jack Miles book, Religion as We Know It, then I move to Wilfred Cantwell Smith, Patterns of Faith Around the World. For the section on Judaism, I give them Leonard Cohen’s song, "You Want it Darker", a David Remnick New Yorker article, a YouTube video on Rabbi Sacks after Leonard Cohen’s death talking about the Jewishness of Cohen. It’s pop culture; they know Leonard Cohen’s song "Hallelujah" from Shrek, so it’s not just here are some books to read, but rather here is Lenny who was a Buddhist monk, and when someone asked him about his conversion from Judaism to Buddhism he says I never converted. It’s making that connection and bringing that into the conversation.  These kids have questions about what is going on now, and so we talk about how it has been going on for much longer than Black Lives Matter or George Floyd. We talk about the historical issues of race and the intersection of race and religion. We talk about Elijah Muhammad who led the Nation of Islam in the context of civil rights, we watch the documentary, I am not your Negro, based on the memoir that James Baldwin never published about Malcom X, Medgar Evers, and Martin Luther King, we read his 1963 book, The Fire Next Time, which gave artistic voice to the civil rights movement.  All that to say is they come into a theology class thinking they’re going to learn Catholicism, or that a course on religion is about making them better people, but it’s making them ask questions about why do people do the things they do, and exposing them to the people who are thinking through these questions and issues.

DSR: What is your pitch to students who think that taking a study of religion class isn’t relevant, or majoring in it can only lead to a career in academia. What I’m asking is, why take a religion class?

AH: We have 6000 students at Loyola, and last year we had 27 theology majors, but we taught 2350 students. Though they were not our majors, they took the class as a core requirement. Those students think a religion studies class is going to be catechism, moral instruction, 10 things to know as a believing Christian, and they're surprised that we are teaching how to write, read and think. When I was an undergrad at U of T, they had a big campaign on what you can do with a liberal arts degree.  The guy who ran the Bank of Montreal spoke, and I was like: “you can run the Bank of Montreal with a liberal arts degree!” The religion major teaches you how to read, write, think and articulate, from different points of view, and that’s what employers are looking for. I taught at a big state institution, and we got a new chancellor who proudly declared that he saw the importance of the university was to create educated workers for the California workforce. I was like, that's my cue to leave.  I want to create educated citizens for the world, I want you to go get a job, of course, your parents want you to get a job.

People ask me, if you're so smart why are you still religious? You have a PhD, how do you believe this stuff? Like if you're a religion major you are somehow uncritical about the world. But religion asks about the nature of the world, the universe.  Science askes the how, religion asks the why.

You're not going to be a politician with a Political Science degree, you probably won’t be a psychologist with a psych degree, but you’ll learn about those things, and they are really important. It’s the same in religion; how do I teach about religion without talking about gender and sexuality, economic diversity, sexual orientation?  Religion studies classes are where people can address those questions. The humanities are crucial and they help us think about who we are. The skills in the study of religion will suit you whether you become a journalist or a doctor.